Is this your Bible? 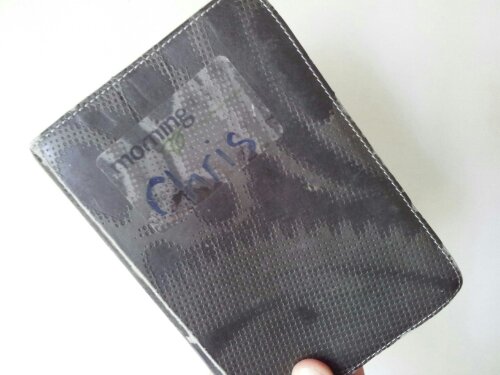 You left it at church about a year ago. I couldn’t find you. So I started using it. I hope you don’t mind! (You’re right, putting my name sticker on the front now seems a bit rude.)

I did not have a complete TNIV Bible (that’s Today’s New International Version). Consequently, I decided to read through this copy when I did a Genesis-Revelation read over the last year. Since this was for my personal Bible reading, I did not take a set of ‘style notes’ on the text. I knew, however, that the TNIV came – and went – with some controversy.

To chase up the details of the controversy you can do the internet-searchy thing. In very short summary, there was a lot about gender-inclusive language. The controversy was so hot that the TNIV has been dropped. It was to be the replacement/update for the NIV. That place is now taken by the NIV. Yes, that’s confusing: the original NIV is now the NIV 1984, and the NIV 2011 is the NIV.

My impression? I enjoyed reading the TNIV.

It did not feel much different from the NIV-1984. I noticed some changes: plural pronouns (they and their for him and his); brothers and sisters instead of just brothers. In other words, nothing unusual for modern English. If it were still for sale, I’d say the TNIV would be a candidate for personal and group Bible reading. It will help you hear God speak as he always does, by the word.

If there’s a more important reflection it’s on the nature of English in flux. We can see the two broad approaches in the two versions of Mark 8:34 below:

And calling the crowd to him with his disciples, he said to them, “If anyone would come after me, let him deny himself and take up his cross and follow me.” (esv)
Then he called the crowd to him along with his disciples and said: “Whoever wants to be my disciple must deny themselves and take up their cross and follow me.” (tniv)

In both cases, it’s clear that Jesus urges denial, the cross, and following. The difference in translation is not about meaning, it’s about reception.

All of us can understand that deny himself applies to any individual, male or female. Yet a modern speaker using singular masculine pronoun thinks either, ‘I am excluding women’ or, ‘I am a woman excluded.’ And that perceived exclusion is rightly a factor in translation (and all communication). It has become preferable to use an ugly phrase so people don’t feel bad. That’s a current reality of English. We can’t blame Bible translators for all of this! (Though I hope we use language’s creativity to come up with better phrases.)

But what a privilege we have to have such easy access to so many useful English Bible translations. It’s time to stop talking about the Bible, but to go and keep listening to it.