Mirboo North to San Remo. The longest stage of the Great Vic, though not as long as if we went to San Remo on the Mediterranean.

A question: what does the Bicycle Network of Victoria (BNV) gain from the Great Vic?

As an observer, not insider, I can imagine a few things. For a start, lots of people riding. In the case of groups (school or friends), it seems there are a good few who have not been regular on a bike.

Also, an event like the Great Vic gives credibility to BNV. They organise a huge event with evident success. When they then speak up about cycling law and infrastructure, they can’t be simply ignored.

I reckon this benefit spreads out: just as the Great Vic had been welcomed by many towns, so more people in those towns might be swayed to view cycling positively.

Another benefit that I have heard of – it may be hearsay – is that big events put on BNV provide much profit. This profit then helps other cycling work. I’ve heard it said that the Great Vic, the Bay in a Day, etc all make money that goes into development. In other words, BNV supports Cycling Victoria (the sports cycling body). I do not know if that’s true. I do know that Victoria and NSW are very different in development: Victoria puts heaps more effort, and paid people, in development.

A related question: how could BNV gain more? (From my limited perspective, of course.)

I could not think of much here. Perhaps I could point out the odd narky ‘helper’ that they should have a word to. (Like the aggro motorcycle cop yesterday who stopped suddenly then yelled at cyclists for not staying left. It was a road only one lane wide, riddled with potholes, and going steeply uphill! Or the very occasional volunteer, usually acting as a marshal, who begins to yell at cyclists for not doing exactly as he/she wants.) But these are quibbles.

More importantly, I think the Great Vic has missed some rider education opportunities. Some school groups have obviously done well in training in road safety and etiquette. Others have been poor – and being poor has reinforced unhealthy riding: crossing the centre lines, riding too far to the right, etc. Of course, plenty of adults are badly behaved too. Some are ingrained in selfish ways, so won’t learn. Yet I am convinced a large number would love to learn to ride better and more safely. I don’t think the Great Vic has done much here.

But time for today’s ride. The first ever ride for both Nahum and Ruth to go more than 100km. Great effort!

We made sure we stopped when necessary (photo below is from the first rest site). And we had plenty of food. 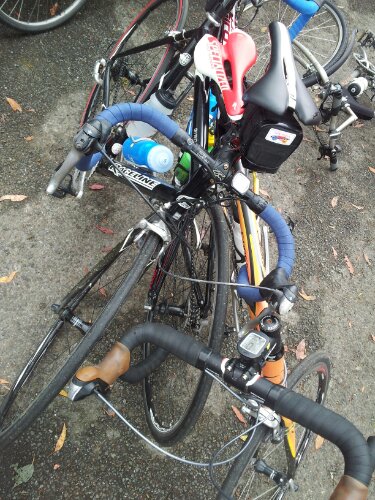 The first half was quite hilly again, before a definite transition to coastal plain. Lunch at Inverloch was beautiful on the aquamarine waters. Then we headed into the joys of coastal headwinds. All the beautiful pictures are on the camera, rather than the phone, so I might update this post with images once I get home.

I am glad to have completed some home podiatry. Ruth had some pain in her left foot. We narrowed down the cause as her new-ish shoes. Ruth felt the foot was rolling out. We grabbed an old tube, put some under the forefoot and the pain is no more. That’s a win.

Tomorrow, across the water to Phillip Island. Then home!

PS One of these three riders had a shower after each ride. No names will be revealed.