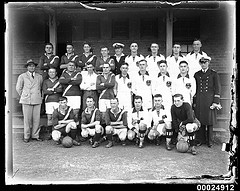 For readers who are part of a church, have you ever thought that your church is just like a soccer team? Because I have.

In a soccer team, everybody gets to put foot to ball. We all work so our team can score. In other words, the small skills are the same (kick!) and the big aim is the same (score more goals!).

Sure, there are differences. Left-footers, right-footers, and ambidextrous freaks. Some run faster, some defend better. But whatever position you are on the team, you kick the ball.

This reminds me of church because everyone who trusts Jesus has the same tasks: live in godliness and speak about Jesus. One might struggle with greed and another with anger – but both seek the Father’s help to struggle well.

And, I’m convinced, God wants us all to speak. Here are some of the types of speech: prayer in Jesus name (private or in groups); singing that encourages faith and gives thanks to God; answering questions about ‘God-stuff’; teaching Sunday school; preaching; leading a Bible study group; sharing a Bible passag to encourage a friend; door-knocking the neighbourhood; teaching your own family the Bible; etc. Some speech is more flamboyant – like the flashy football striker. Some is really high pressure – like taking a penalty. Some is essential but almost unseen – like the hard-working defender. Yet it’s all speech for Jesus.

Now, every soccer team has one odd-bod. The goalkeeper. The keeper also gets to kick the ball. And the keeper has the same aim – that the team score and win. But they also get to handle the ball, and wear funny clothes. They’re a bit different. Just like paid ministers (that’s me). There are many similarities between goalies and ministers/pastors.

And let the peace of Christ rule in your hearts, to which indeed you were called in one body. And be thankful. Let the word of Christ dwell in you richly, teaching and admonishing one another in all wisdom, singing psalms and hymns and spiritual songs, with thankfulness in your hearts to God. And whatever you do, in word or deed, do everything in the name of the Lord Jesus, giving thanks to God the Father through him.