There’s a long-standing criticism of Christians that goes like this: whenever there’s something humans can’t explain, you say ‘See! That’s God at work’.

And fair enough too. What a silly argument. How does ignorance on the part of Person Y (me!) provide evidence for the existence of Person X (God)? All it proves is that there’s a hole in human knowledge – and that is not breaking news.

Honestly, though, I have only heard this argument for God a couple of times. The places it has come up have been informal chats among church folk. It’s is usually followed by an uneasy polite silence as everyone else considers how to change the subject. 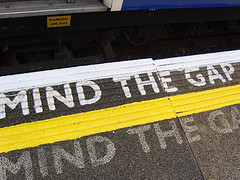 In contrast, I hear essentially the same argument more frequently against God.

Like this: there are holes in scientific knowledge, but we know that science has capacity to provide the answers. It’s science of the gaps. There’s a strong faith that the ‘scientific method’ is the single method capable of finding truth and certainty.

In my experience, the fields in which this mantra tends to appear are: ethics and society; the nature of mind, consciousness and personhood; questions of ultimate reality and purpose.

The weaknesses of Science of the gaps are many. Here are three:

In science (as in Christianity) it pays to ‘Mind the gap’.