Cadel Evans: Close to Flying by Cadel Evans
My rating: 4 of 5 stars 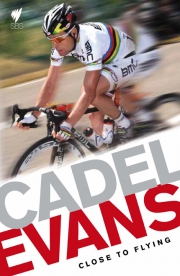 I really enjoyed this (four stars), but might not recommend it to you to read (two or three stars). I’m writing a quick review to try and explain why. Maybe it’s to try and understand why!

I like cycling. I ride. I follow the professional sport. In many ways, much broad content of Close to Flying is not so new to me. But what I enjoyed was more of the back story to Cadel’s life, including the earlier mountain-biking years. I could almost have seen him competing at the Sydney Olympics – except that I chose to attend the women’s cross-country MTB rather than the men’s.

Yet, despite personal enjoyment, there are all sorts of problems in the book.

One, which may sound unfair, is that it’s quite out of date now that Evans has won the 2011 Tour de France. The whole tone is of a rider who has come second twice, perhaps missing his best opportunity. Of course, (you might object) what other tone could there be for a book written while the career continues? And that is precisely my point: it’s written mid-career, as seems to be happening for more and more sportspeople. If you take the risk to write early, you have to accept the risk of being dated very quickly.

The content is a touch ponderous and repetitive. OK, I get it that Evans was born in a remote part of the Northern Territory – but the book gives far too many versions of ‘look how far he’s come from Bamyili’. You told us. Move on!

The target audience is hard to discern. At times, very simple cycling ideas are explained. At other times very cycling-specific references are thrown in unexplained. On the same page as cycling cleats receive a paragraph of detail, there’s a throw-away comment about ‘the Festina affair’ – which is not explained until a later chapter.

Along this same line, and as a cycling follower, I could spot gross oversimplifications. The internal team dynamics of Cadel’s pre-BMC teams, and the Australian world championship team in 2009, have had plenty of press comment. Cadel is said to have contributed to this awkwardness. So, is it true? Were the reports malicious? What was going on? It’s unsatisfying to read the equivalent of a brush-off, that the Australian world’s team was simply ‘united’, while suspecting a deeper story.

Most notable to me, though, is the extensive use of first-person quotations from key figures in the book: Cadel, his wife, parents and trainers. I reckon the explanation is that it allows people ‘their own voice’. When it works, it’s brilliant – Chiara’s account of the final of the world championships on 2009 is outstanding. It usually does not work. Just because someone central to the story spoke does not mean their content is relevant, or their words well-crafted. Much of the quotations feels like filler. Do we need to know the names of restaurants people ate at?

So here is a strange review. Quite a panning, because I don’t rate it as a good book. But quite a high rating because the subject and many details are fascinating to me, as a cycling fan.