The big day! Not (necessarily) the longest, but certainly the day with most climbing. From Rosedale to Traralgon, via a loop to the south.

Day four was also described as needing a decision: ride the standard 80km or so, or take the optional route to total about 120km. To add further colour, day four also included a section of unsealed road. How was it all?

It was a cross between an epic and an ordeal. As we finished breakfast, Rosedale rain began to fall. We hurried to put on a base layer, grab jackets, and zip shut our bags. The rain continued for the first three hours of riding.

Did I mention the unsealed road? Presumably the Grand Ridge Road provides wonderful views of the La Trobe Valley, and even to the coast. On a clear day! Today it was a wet, sandy logging road that was not ideal for skinny tyres. It was, however, effective in making my front mech sound like a chain-saw. The organisers provided the option of shuttle buses across this section for nervous riders (which meant they could not provide support for the optional longer route – a fair enough use of resources).

And the two juniors completed all I’ve just described, with great steadfastness.

We didn’t stay as three amigos today. At the base of the climb, we agreed the Nahum and Ruth would go at their own pace. Nahum left while Ruth got organised at the first rest spot. I planned to stay with Ruth, after giving her a few minutes’ start. This is where things became messy.

In jackets, we did not easily recognise each other. Apparently Ruth passed Nahum before I caught Ruth. With eyes only for Ruth, I didn’t see Nahum. At the top, I crested and hit the downhill faster than Ruth. Concerned I was too far ahead I turned and climbed back up the road, failing to spot Ruth as she went past. I guessed this was the problem, so joined the merry throng until the dirt road. ‘Surely Ruth can’t be ahead now,’ I mis-thought. So I slowly descended – to be surprised at finding Nahum. He told me about Ruth being ahead, so we trawled the sand together. Ruth toughed it out alone. Some effort! We caught her just after the 10km of unsealed road.

Sadly, Ruth was by now very cold. With little chance of heating up. After a frigid lunch stop, things were no better. So we joined a huge crowd in the local cafe waiting for heat-medical care-sag wagons.There were hundreds who pulled out at this point, some even being taken to hospital with hypothermia. Once Ruth was warmer and stable, she sent us off. Ruth did not reach the camp until near 8pm, in the last bus of sag-waggoners.

Not much chance of photos today. Here’s one of the dirty discards, back at camp. 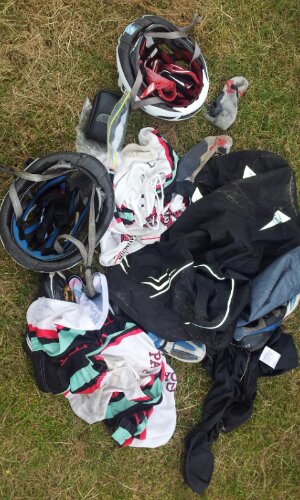