A Short History of Secularism by Graeme Smith is both insightful and flawed. The insight, I think, does not undo the flaws. Neither do the flaws negate the insight. 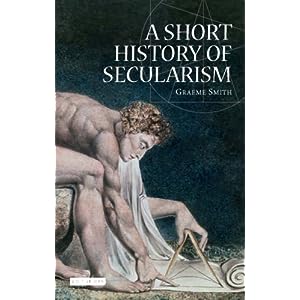 This is Smith’s one point summary:

What I shall argue in this book, in very general terms, is that secularism is not the end of Christianity, nor is it a sign of the godless nature of the West. Rather, we should think of secularism as the latest expression of Christianity.

Instead of reviewing the whole book, I will highlight one big insight, and one significant flaw.

Insight
Smith challenges current assumptions about religious decline and the triumph of secularism.

The popular story (myth?) is that religious practice and devotion has, since its Middle Ages peak, been in decline. And that this decline has been accelerating with the rise of reason and science. Smith disagrees.

Instead, claims Smith, the reality is that Victorian religious observance was the exception. And the religious life of the Middle Ages was much more varied than any caricature allows – in fact, its complexity is comparable to the present. Hence, the ‘long decline’ point of view does not apply. Nor is it useful to compare observance now (or at any time) with the extraordinary data of the Victorian period.

What’s failed, says Smith, is atheism. The west may be secular, but those who identify as atheist are a small minority. It’s not the case that atheism is automatically linked with belief in a secular state.

Likewise, it’s not the case that failure to attend church means Christianity has no value. “What we have today is minority Christian activism, the 15 per sent or so who attend church, alongside majority passive Christian support, the 70 percent and more who claim some sort of Christian identity and express a vague support for the idea of a God.”

Smith’s insight means there’s no reason for unbelieving triumphalism, nor for believing no-hopism. (I’d say that believers need be wary of using a ‘no hope’ attitude to excuse a ‘no effort’ way of life. But’s that’s another matter!)

Flaw
The problem I had with Smith’s book – and this is some problem – is that it’s totally confused about what Christianity is. He coalesces Christianity with how Christianity is lived. For him, belief and practice are not merely related, they are identical.

Smith writes, “It is not possible to separate the ahistorical and transcendent from its immediate local expression.” The book therefore, assumes that Christianity is what Christians do. It is not, it seems, about the work of God in Jesus.

I don’t think Smith needs to go down this path to indicate that Christianity is still active, even in a secular society. His book would still work with a better definition of Christianity. I think this cultural (and relativising) approach of Smith is his personal starting point. The shorthand for this is liberalism: answering religious questions by appeal to some aspect of humanity, rather than some aspect of divinity.

In summary: I’d recommend this book because it challenges some of the endemic secularism myths of the West, though it is not the place to go for a good description of Christianity.